This was my very first Edcamp as just an attendee and it was awesome to be at an Edcamp and not have to worry about anything except which session I was going to attend. It was great to reconnect with Jen Wagner, Dennis Grice, Karl LS, Holly Clark, Moss Pike, and Jo-Ann Fox (and I’m sure I’m leaving someone out) and it was wonderful to meet Sam Patterson! The organizing committee did a super job – you never would have known it was their first time organizing an Edcamp – kudos to all of you. The day ran pretty much on time, the WiFi was working and they even got Twitter unblocked (Yay!), the Slam! at the end had great what I learned shares, the food was amazing, plentiful, and free and there weren’t super huge lines for lunch either.

AND … I won a Kindle Fire HD!! How amazing is that. Edcamp Palm Springs ROCKED! I’m so excited because I do have Amazon Prime and now I can borrow books from the Kindle Owner’s Lending Library. I love gadgets and have wanted to get a Kindle but couldn’t justify it.

I didn’t even propose a session – instead, I was able to attend all 4 sessions and here were my choices: 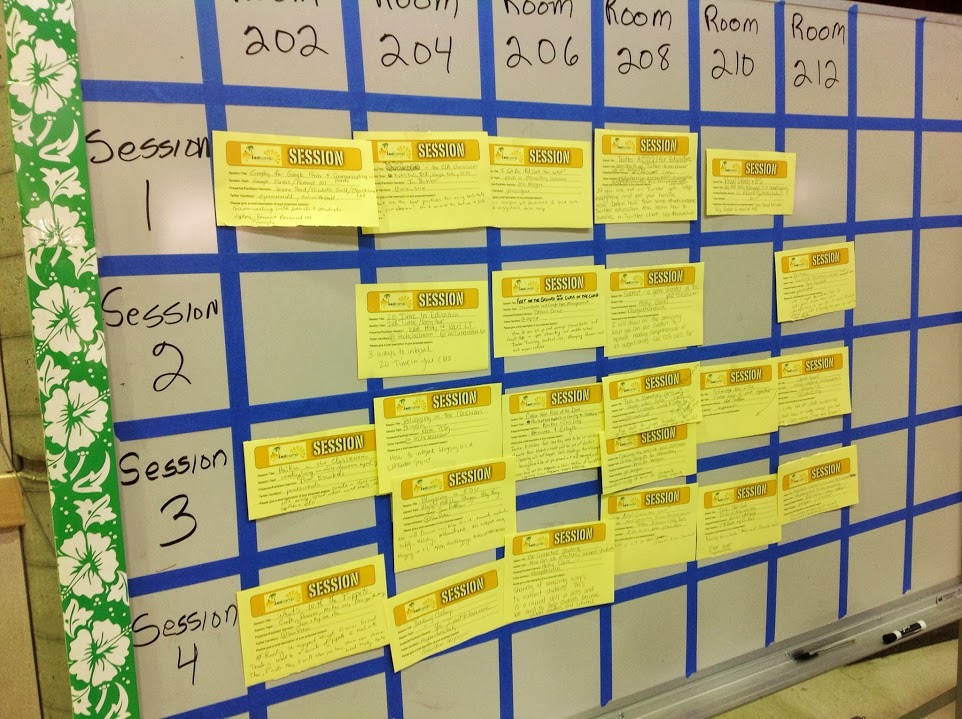 During pretty much every session time, there was more than one session I wanted to attend. I really hope that people add their resources to the EdcampPS Wiki page so I can feel like I went to more sessions that I did.

While I learned something or had my thinking pushed in each and every session, I found that my favorites were those sessions that were not someone standing at the front of the room using a presentation tool or showing me how to do something. That can be very valuable and I’m sure for some this is what they wanted but to me Edcamps are about discussions. Discussions where no one is the sage on the stage and you’re sitting in a circle to facilitate the discussion or you’re moving around the room. This might come from attending Edcamps where WiFi was an issue so that conversations and discussions were mandatory because the tech just wasn’t there but I think there’s more to it than that. These kinds of sessions just make me think and actively participate more and just feel like an Edcamp to me.

So, why do there still seem to be so many sessions that are “traditional” at an Edcamp? This is the question running through my brain today. Having been an Edcamp organizer for 6 different Edcamps – EdcampOC (2011), EdcampSFBay (2011-2013 though I didn’t attend in 2013), EdcampOCLA (2012), and EdcampLA (2013) – and in charge of the Session Board for 5 of those, I have been mulling over how to improve the session board building process. Even before attending EdcampPS, I had been wondering:

What do I think could be done to address these things? As I have thought about this since EdcampLA, here are some things that I think might work. Instead of saying the first hour is for registration & socializing, it should be turned in to the Session Board Hour where, of course people can socialize, but they should also concentrate on helping to define the day:

We actually attempted something like this at EdcampSFBay in 2012 and there was definitely somewhat of a bottleneck. Part of the problem was that we didn’t have WiFi that day so the physical board became very important since some attendees couldn’t access the online board.

Having only attended California Edcamps and having been an organizer at all but one that I’ve attended, I wonder how other Edcamps are dealing with this … or if this is just me seeing a problem when there isn’t one? I’d love some feedback about this.

Have you helped to organize an Edcamp? How did your session board building work? Are there things that worked great? I’d love to hear about it. What, if anything, would you change?

#edcamppsedcamp
Published on:September 15, 2013 Category: Professional Development, Reflections
«Dot Day & ColAR app: Adapting for the Computer Lab »If I Could Only Use One …