One of the things I have been very excited about this year were all of the different online collaborative projects I have been doing with my classes. These all involve some fun and different activities using a variety of tools and applications. The conundrum is this. My students are doing a great job completing these activities and we’re posting them online. A lot of other schools are also completing the activities and posting their projects online too. But, it feels more like the parallel play that you might see with very young children at a park rather than children playing and interacting together.

Ann Oro shared a wonderful map illustrating the collaborative projects that her students are doing this year and I loved the idea so much I am planning to put one up in my computer lab starting next week. I think it will help the students (and parents at Open House) see the connections we are trying to make around the world. Some of the projects my students are involved with have many schools participating but none that I feel we’ve connected with. So do I include these on the map as long as we’ve added to the project and the other schools have added to the project or don’t I? We’re in the project and the other schools are the in project. We’ve both posted finished activities, videos, pictures, etc. to the project but have we truly collaborated? Does there have to be a more tangible connection of some kind or is just being part of the whole project and adding to that enough?

Last year, I stumbled upon the Voices of the World wiki and loved the project and the global feel of it. I was thrilled this year when my 4th Grade class became a part of this project. This project is now one of my do I include all the other schools on the map projects. I don’t know that my students feel the connection to the other schools they way that I hoped they would or that they really understand that there are students all over the world drawing pictures and saying or singing the same thing as they are. Would putting all of the schools that have participated so far this year help them to understand?

Another of my do I include all the other schools on the map projects is the A Room With A View project. My students are doing their part. We take a picture each month and record information about the day and time the picture was taken and upload it to our wiki and to the gallery for the project. Each student also writes a paragraph about the month and what they like or don’t like about it that they post online. Once again I don’t think my students feel connected to the other schools. It’s hard to find the new pictures each month because there are a lot of schools involved. I have posted a request for a few other schools to connect with on the A Room With a View ning and may email a few participants directly next month to try to make more of a connection.  Would adding visual references for the schools help my students connect more with the other schools? Do I really add all the schools involved? Since my class is 6th graders do I only put connections with other 6th grade or 5th & 6th grade classes? Would that be missing the point of the project?

I always seem to have more questions that answers. I do know that because I’ve been thinking about this I plan to have my students spend some time looking at, listening to and commenting on the work of others involved in their collaborative projects. This is our first task in the computer lab when we’re back in school with my classes involved in the Winter Wonderland project and the Voices of the World project. As we watch and listen and comment we’ll add another string to our map as we connect our school with others around the world.

I was tagged by Nedra Isenberg and Ann Oro for the Wordle Meme started by Lee Kolbert. So, I took the challenge and here’s mine: 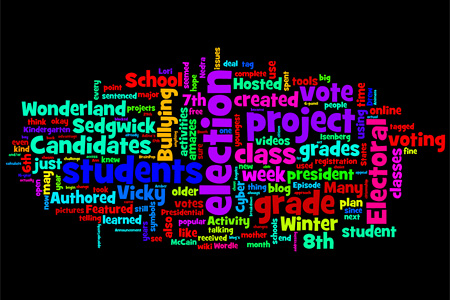 It’s obvious that I talk a lot about student projects on my blog and that’s a good thing since that’s the purpose of my blog. You can tell that the election was a recent subject of posts … and actually of projects in the lab. It will be interesting to see if this changes over time. I’ll have to try this again every few months or so and see.

Here are the directions:
1. Create a Wordle from your blog’s RSS feed.
2. Blog it and describe your reaction. Any surprises?
3. Tag others to do the same.
4. Be sure to link back here and to where you were first tagged.

Frustrations:
This week over on the Elementary Tech Teachers Ning there is a discussion about Frustrations in the Computer Lab. I didn’t start it but I definitely empathize with it. It’s very hard when you get asked the same questions over and over and over again and no one seems to be listening. That discussion thread got me to thinking how best I can try to head this tendency off at the pass:

I have also had some frustrations this week due to problems with our Internet connection. More and more of what we do in class depends on the Internet so when it’s not available that can be a real problem. For the next few weeks, I am going to have alternate plans available for each day so that if there are issues I don’t have to try to figure out what to do at the last minute. Our provider did come out and look at what was happening this week but they said there was nothing they could do – of course at the time they were there it was up. Isn’t that always the way it happens?

Triumphs:
I’ve been using some of the ideas that one of the teachers that I have met online has posted on her Kid Pix Projects pages and the kids have really enjoyed them – thanks Ann. Kindergarten was introduced to the pencil tool in Kid Pix and asked to draw a picture only using that tool. A few of them really wanted to use other things available in Kid Pix but did do the assignment. 1st Grade reviewed the pencil tool, Uh-oh Man and eraser and then created Self-Portraits only using the pencil tool. I did let them use the flood fill bucket at the end to color in the background but they had to have finished their portrait with only the pencil tool first.

2nd Grade started an ABC Chart of Initial Letter sounds using stamps that start with the initial letter sound. 3rd Grade also started an ABC Chart of Initial Letter sounds but they are using stickers instead of stamps. 3rd Grade really liked learning how to move things around and about flattening stickers and how to use the scissor tool to delete things. They have a hard time with the eraser and often end up erasing more than they want to so they think the scissor tool is wonderful.

The teachers are starting to ask me if I could integrate with certain things more. I’m happy with that. All of Middle School has to turn in a crossword puzzle as part of their Book Report next month so I’m working with the Middle School students on how to create crossword puzzles in Excel and I’m giving them some web sites they could use too. I’ve also started putting spelling lists into Spelling City and a few grades have played some of the games there with their spelling lists.

Plans:
I just found out that Voices of the World is starting up again this year. I had just signed up to have 2nd Grade do the Online Autumn Project (Kindergarten was already signed up to do this one) so they won’t be doing Voices of the World but I will have 4th Grade do it. 4th is a small class this year so I can teach them how to record their own voices for this. I’m hoping that our Internet connection doesn’t give us problems again because I really would like to finish the book reviews on Voice Thread this coming week.

And how is your school year going so far? Share your frustrations, triumphs and plans!