This past week it was time for another what’s wrong with education documentary. This time it was the film Race To Nowhere. 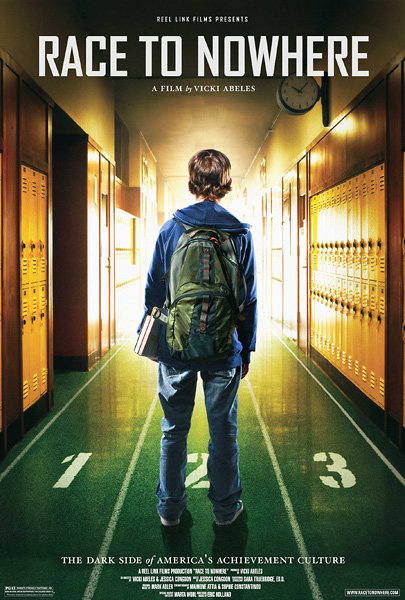 While Waiting For Superman concentrated on failing schools and the students who don’t have access to quality education, Race To Nowhere focuses on students that are succeeding and the pressure on them to excel. I found myself identifying with the issues in the film because they are my issues:

As I struggle with some of these issues with my own children and wonder if I can convince my younger daughter’s school to have a screening of the film, I have to say that I am glad to be a teacher at my current school. We are certainly not a model of a 21st century school but we are a school that realizes that there is more to life than academics. We are a school that does limit the homework load and does not place an emphasis on standardized tests. The students do take standardized tests once a year in the spring, but our school culture is not one of teaching to the test – thankfully.

The crisis in education in this country is real. There is too much emphasis on testing and racing to the top or not leaving a child behind (by whatever name it’s currently called) and there is a definite inequity of access to quality education. We need real discussions about this and not the media hype that’s been going around lately. I would urge everyone to read Chris Lehmann: This Isn’t An Education Debate and attend or view the archive of Elevating the Education Reform Dialog.